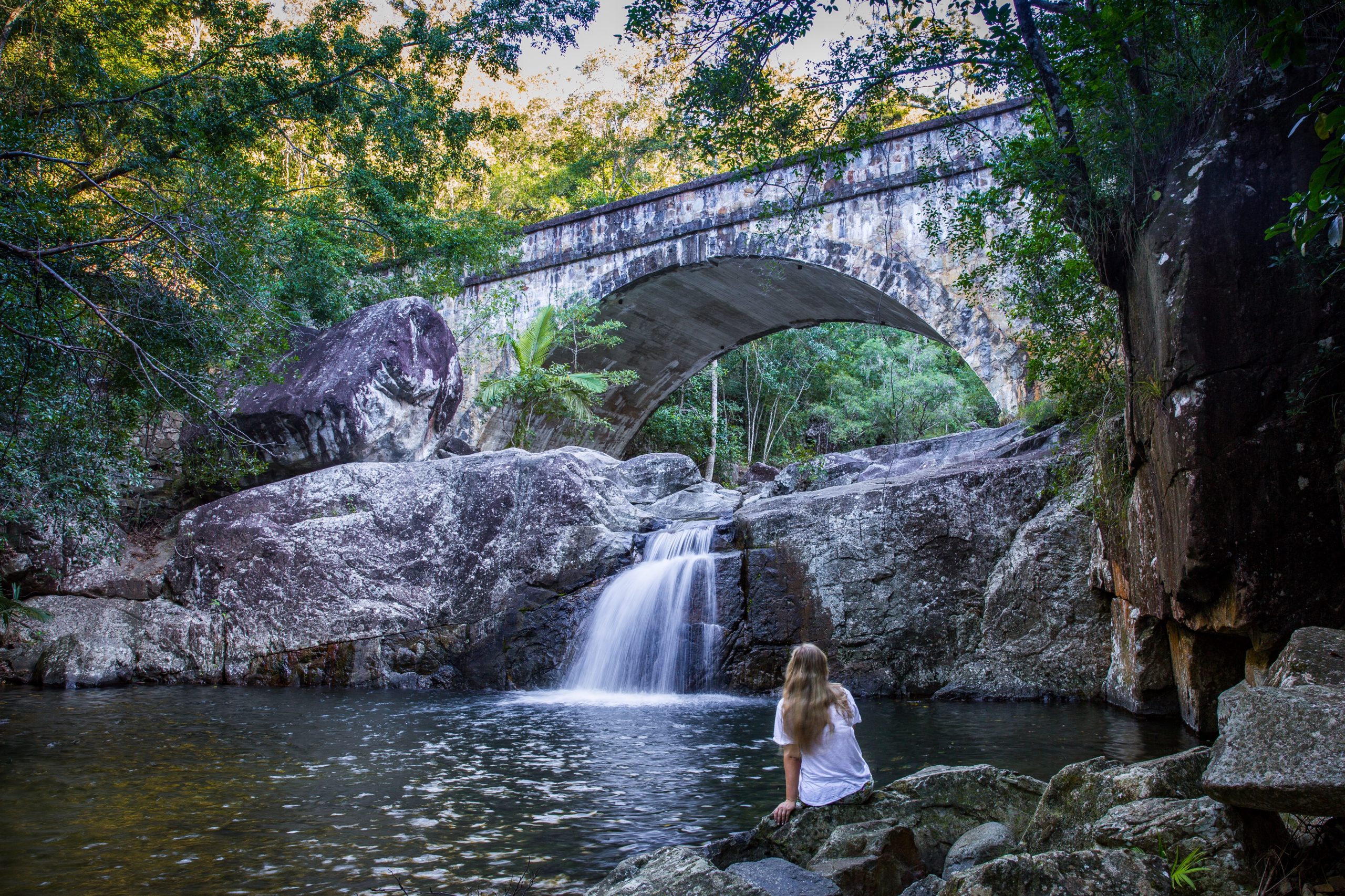 A Locals Guide to Townsville

One minute you’re in the city, 20 minutes later you are standing on Magnetic Island in all its hilly, granite and eucalyptus forest glory.

If spotting Australian wildlife is high on your to-do list, this island promises wild koalas, rock-wallabies and all the colourful creatures of the Great Barrier Reef.

Sure, you could sit under a palm tree and read a book, but you’re not that kind of traveller, are you? If you like outdoor activities, start working your way through these must-dos.

Don’t miss the Forts Walk to see two WWII military bases and the most spectacular views of Magnetic Island’s 23 bays and beaches. 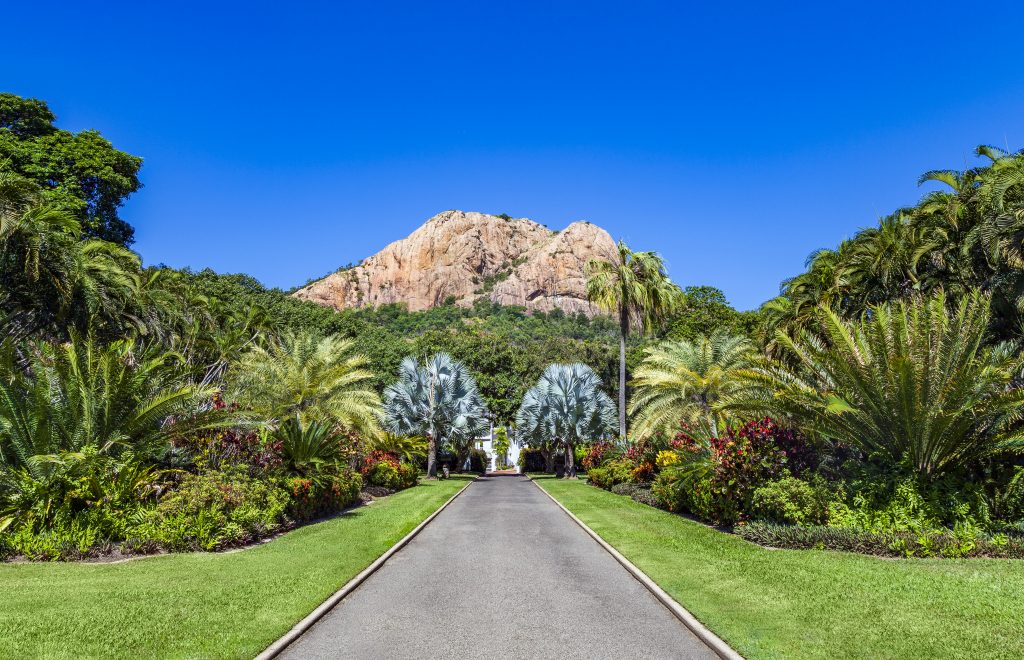 This granite monolith, which falls only metres short of being technically a mountain, is not short of fans. You only need to see the steady stream of active-wear clad locals who run and walk to the summit (286m) each day to get a sense-check on its popularity.

If the walk to the top doesn’t take your breath away, the 360-degree vista of Townsville and out to Magnetic Island will. Naturally, the best time to soak it all in is sunrise or sunset.

The Museum of Underwater Art (MOUA) is a series of globally-significant artworks located on the Great Barrier Reef in Townsville North Queensland. MOUA’s inspiring art pieces have been created by the world’s leading underwater sculptor – Jason deCaires Taylor. As Jason’s only underwater art museum in the Southern Hemisphere, MOUA has been created to inspire and educate the globe about reef conservation. The artworks have been built to allow for coral planting to support reef restoration.

Snorkel or dive this spectacular underwater marvel and witness as these incredible artworks over time transform into their own eco-systems thriving with marine life.

Discover a world below and hear the reef’s greatest stories. Be inspired by MOUA.

For families and wildlife lovers

Spend the day at Billabong Sanctuary to get up close with a wide assortment of native wildlife and other creatures. Interactive experiences include turtle feeding and racing, a free-flight bird show, a crocodile-feeding exhibition and the chance to pat dingoes and hold koalas.

It only takes an hour’s drive north of Townsville to find Paluma Range National Park.

These ‘misty mountains’ as they are translated from the local Aboriginal language, are home to the Wet Tropics National Park, rainforest and waterfalls for exploring.

It goes without saying, bushwalking and waterfall chasing are the order of business for your hinterland day out.

When it comes to outdoor activities in Townsville, Paluma has two of the best – Little Crystal Creek and Big Crystal Creek.

Pack your swimmers for rock-hopping and a dip in their crystal-clear water. Be sure to keep your eyes peeled for platypus who paddle up and down these rainforest streams.

Hit the road 160kms north-west of Townsville to visit the Niagara Falls of Queensland –Wallaman Falls.

This wonderful waterfall is Australia’s highest single drop waterfall, cascading 268m in a show of raw, rugged energy. Depending on how fit you feel, you can choose to take on an 800m stroll down to the banks of Stony Creek, a 3.2km hike into the gorge, or go the whole hog with the 56.5km Wet Tropics Great Walk.

Regardless of which one you choose, pack swimmers for a dip in the large pool that collects Wallaman’s thunderous spray.

Why? The water at Wallaman Falls is said to be THE purest in the world (at least, according to scientists at James Cook University).

If they were handing out crowns for outdoor activities in Townsville, the city’s largest national park, Hinchinbrook Island, would definitely be coronated.

This 393km2 island separated from the mainland over 100,000 years ago and thanks to Queensland Parks who cap visitors to 40 people at any one time, the landscape has been preserved in time.

Hinchinbrook attracts hardcore hikers who sign up for the 32-kilometre Thorsborne Trail chasing both fitness and a wilderness adventure. 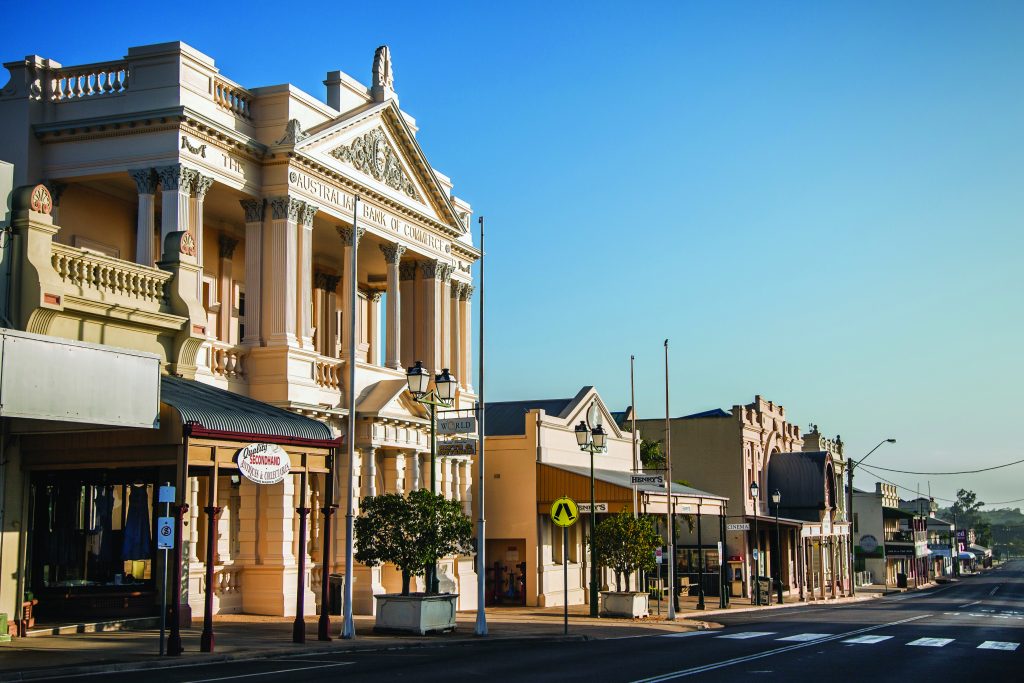 You don’t have to travel far to taste the outback from Townsville.

Gold put this small town on the map, but golden sunsets, outback colours and these things to do have kept Charters Towers popular with visitors.

For a true outback experience, head to Leahton Park to meet JR, the Texas Longhorn with the longest horns in the world.

We challenge you to find another destination where you can don your cowboy boots by day and be back in the CBD sipping cocktails by the coastline for sunset.

Just because you’re looking for outdoor activities in Townsville doesn’t mean you can’t do them in style.

On Orpheus’ 12km you’ll find eucalypt forests for bushwalking, palm trees for relaxing and coral reefs that are perfect for snorkelling.

Unlike the other outdoor activities on this list, Orpheus Island is only accessible by helicopter or private charter, so you know you’ll be only one of a handful of guests staying in the 14 suites on the island.

For a full guide to this island you probably haven’t ever heard of before reading this blog, or swim over here to see why Orpheus Island is a must-do. 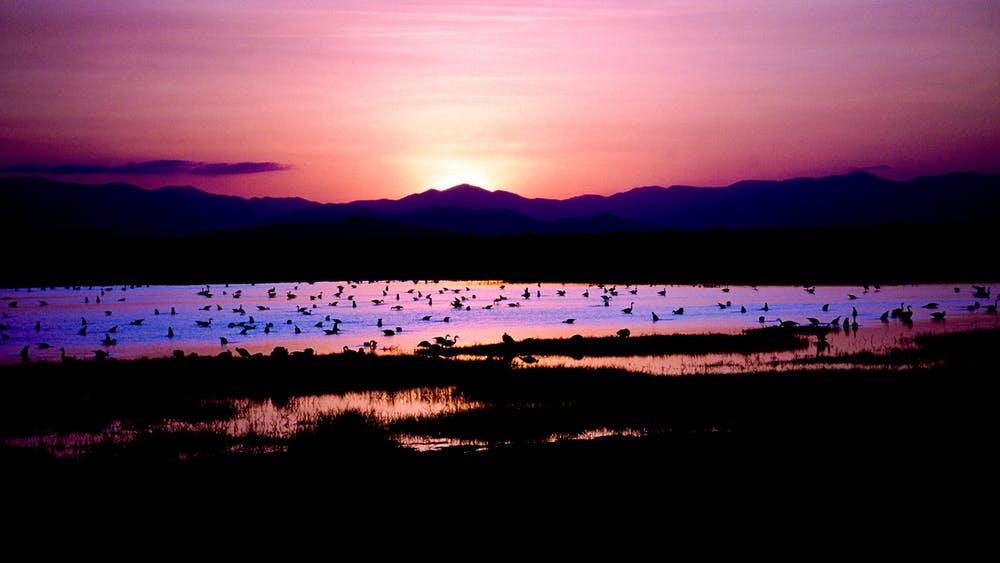 Known locally as the Town Common, the park is close to the bustling city centre of Townsville and is a great place to enjoy nature and fantastic coastal views.

The walking and mountain biking trails, ranging from short easy walks to cross-country mountain bike rides, are a popular nature escape—and lots of heart-pumping fun—close to the city. Hike across the Many Peaks Range, enjoy expansive island views while riding the Under the Radar or Smedley’s trails or take the trail to the beautiful and secluded Shelly Beach.

This Park is a birdwatcher’s paradise! From bird hides and observation points, spy comb-crested jacanas and plumed whistling ducks in the wetlands, and double-barred finches and red-backed fairy-wrens in the grasslands. Look for magpie geese, brolgas and many other species that gather here to feed and nest, particularly as the wetlands dry out and food sources become concentrated in the remaining lagoons. Keep your eye on the skies and you might see brahminy kites and white-bellied sea-eagles scanning for prey. 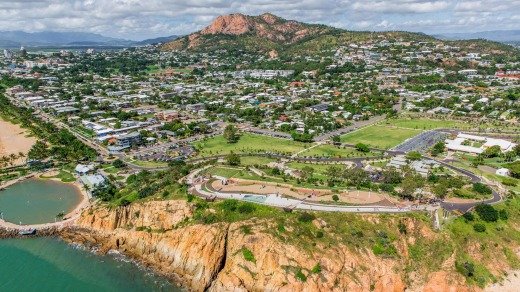 A significant site for both the Australian military and local Aboriginal People, the Jezzine Barracks are now open to the public and include coastal boardwalks, artwork, traditional plantings and parklands.

The space includes a coastal walkway connecting Rowes Bay and The Strand, observation decks up at Kissing Point Fort, traditional plantings along the ethno-botanical walk, the Crossed Boomerang Amphitheatre, Norman and Brigadier North parklands and the Kennedy Regiment Plaza.

The Traditional Owners of Garabarra are the Wulgurukaba people and the Bindal people, who retain an enduring ‘connection to country’ despite the impact of non-Aboriginal settlement in the area. For thousands of years Garabarra was the centre of a common food foraging area for local Aboriginal people – an area with immeasurable cultural and spiritual values.

The Fort was established in 1870 after the British withdrew from the colonies and it was in continuous military use from 1885 to 2006. In 2007 a community trust was established to keep this land in public hands. 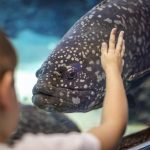 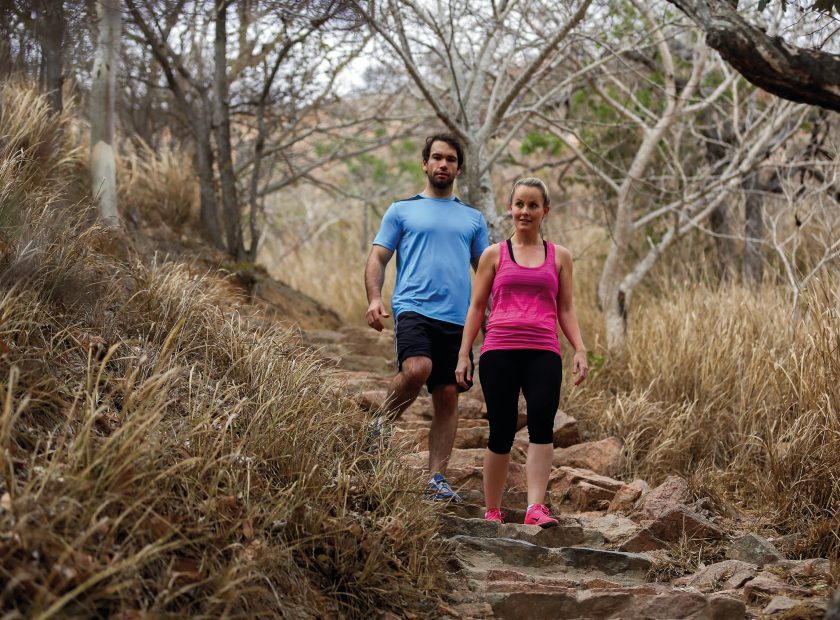 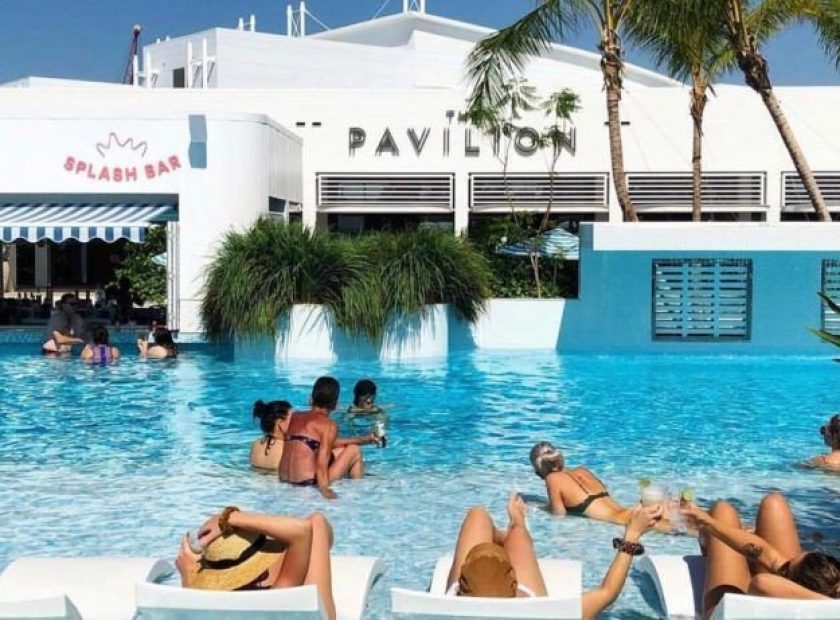